Situated on the Adriatic Coast, Bari is the regional capital and a major industrial city in Southern Italy and has been an important commercial, fishing and ferry port since ancient times.

Today Bari continues to be a busy port with ferries departing to Greece, Albania and Croatia.

There are many places of interest to visit in the surrounding region from baroque churches, castles such as the magnificent Castle del Monte, underground caves such as the spectacular Grotte di Castellana and stunning countryside dotted with miles upon mile of olive groves and the conical buildings called trulli which are unique to Puglia.

The town consists of three parts: the old town on the peninsula to the north, with the splendid Basilica of San Nicola, the Cathedral of San Sabino (1035 - 1171) and the Swabian castle, now also one of the major nightlife districts; the Murattiano town to the south with a seafront promenade, major shopping district and heart of the city, and the newest enlarged quarters all around.

Bari's defining historical moment came when Puglian sailors brought back the remains of San Nicola, Bari's patron saint, from its original resting place in Myra in Lycia (part of modern-day Turkey) to Bari on 9th May 1087. Needing a suitable depository for the saint's relics the townsfolk immediately began work on what would become the city's most important building, the Basilica di San Nicola.

The Basilica today dates back to the end of the 12th century and is a fine example of Romanesque architecture. It is the focal point of Bari Vecchia (the old town) and receives thousands of pilgrims from all over the world each year, including a great many Greek and Russian Orthodox visitors. Of particular note is the Festa di San Nicola, which runs from 7th-9th May each year to commerate the arrival of the saint's relics in Bari and is celebrated with costume pageants, popular music and a two-day fireworks contest.

The most dominating building in old town is the the Cattedrale di Bari (San Sabino) around which are clustered four major  piazzi -Piazza Odegitria, Piazza San  Sabino, Piazza Bisanzio and Piazza Rainaldo.  Emanating from these piazzi is a network of narrow streets and alleys, on which one finds more churches and other sacred buildings interspersed amongst the many shops, cafes and restaurants.

The city's busy modern heart, originally laid out on a grid plan in the 1700s experienced rapid growth in the the 1960s and 1970s features commercial offices, but also some of Bari's finest shops, mostly along the Via Argiroand Via Sparano.  The most important piazza in the area is the Piazza Maggiore, on the edge of which sits a major government building, the Palazzo di Citta. A number of Baroque churches with impressive interiors, such as the Chiesa di Santa Chiara and Chiesa di San Gaetano were also built. Ever newer areas, with the usual glass clad office towers spread further inland from this area.

The Corso Vitorio Emanuel follows the waterfront to the Murattianno area further south.  The harbor here is fronted by a long promenade where one can while-away the hours with a good stroll, or even a jog. A number of yacht harbors snuggle the wall, to provide the merely rich and the immensely wealth with places to tie-up for a bit of onshore fun, shopping or business.

Bari Vecchia is a fascinating weave of streets that, until around 10 years ago, was considered a no-go area by the locals. A radical clean-up operation, however, has transformed it into a wonderful area for strolling, full of cafés, bars and restaurants. Just a short walk from Piazza San Nicola are Bari's other major architectural attractions: the Cattedrale di San Sabino, also built in a late 12th century Romanesque style by the Normans, and the Castello Svevo, Emperor Frederick II's mighty fortress. 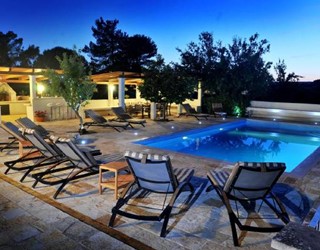 Large luxury villa with pool in the stunning Puglian countryside located in the Valle d'Itria between the towns of Martina Franca and Locorotondo. Family friendly with lots to keep the children occupied. Sleeps 13 plus 3 babies in travel cots.