For translation select language below

The province of Taranto is found in the Puglia region of Italy, which is the region that forms part of the heel of Italy's boot.  The region of Puglia is divided into five provinces (Bari, Brindisi, Foggia, Lecce, and Taranto) and includes the two island groups of Tremiti and Cheradi.  The weather is typically hot and dry. The beaches on the coast of the Ionian Sea offer plenty of places to sunbathe, swim, and snorkel.

One of the charming and beautiful geographical features of Taranto is where three sides of land face inwards on the Mar Grande, the Mar Piccolo, and the Ionian Sea.  The Citta nuova (New City) is located inland and is linked to the Isola della Citta Vecchia (Old City) by the Ponte Girevole and di Pietra Bridge.Taranto is one of Italy's oldest and most beautiful port cities. It was founded by Greek sea-faring colonists from Sparta around the 8th century B.C.E.

Legend has it that Taranto was founded by Taras, one of Poseidon's sons and ancient coinage depicts Taras riding a dolphin, sometimes with a trident in his hand. Taranto reached its height of glory during the Grecian era, but there is little left of Taranto's Greek past.  Since modern day Taranto is built on top of the ruins of the old city, only few ruins remain. One can visit parts of the old wall surrounding the city, two Doric temple columns dating back to the 6th century B.C.E., and tombs. Future excavations may reveal more ruins from the Magna Graecia or "Greater Greece" era.

Modern day Taranto is a city that still keeps an ancient heart. It stands on a shoreline famous for its beauty, balanced between the Mar Grande and the Mar Piccolo. In the northern part of the city there are the calm waters of  the Mar Piccolo, at the southern end the grandeur of  the Mar Grande bursting in the Gulf of Taranto (on the Ionian Sea).

Most of Taranto occupied the "città vecchia" until the last century, when the peninsula was turned into an island connected to the town by the stone bridge and by the swing bridge. The historical center is a peculiar network of narrow alleys surrounded by elegant and poor houses, restored or decaying buildings. From Via Garibaldi you will arrive in an area of the old town where the restoration of buildings have been completed.

In Piazza Castello there are the castle, the town hall and the Doric temple. Nowadays the castello hosts the head quarters of the Navy, but it was built more than 500 years ago by the Aragoneses. The cylindrical towers date back to the primitive construction (1492) which was enlarged by the Spaniards.  The ruins of a great Doric temple consecrated to Neptune are represented by two tall columns (VIth c. B.C.). The deep channel allows the crossing of militar and civil ships going from Mar Grande to Mar Piccolo and vice versa. The swing bridge is the entrance to the city.

Take a stroll from the bridge along the promenade you will see padlocks of various shapes and sizes attached to the railings as traditionally departing lovers or friends place a padlock on the railings which is unlocked when they are reunited.

The National Museum faces the beautiful gardens of Piazza Garibaldi. It is considered one of the most important archeological museums in Southern Italy for its wide collection that gives visitors a complete view of the Magna Graecia civilization. The history of Grecian Taranto can be read in the precious art exhibits of the museum. Most of the rich collection of terracotta objects, ceramics and jewels come from the tombs of the necropolis on which modern Taranto has been built.

Taranto's coastlines  are full of beautiful beaches and small seaside resorts where fishermen often stop their boats to sell fresh and tasty fish, octopus, mussels and oysters. Traditional foods offers a variety of delicious dishes based on a combination of either fish or meat with excellent vegetables. 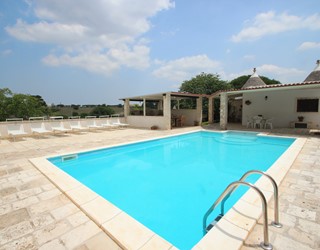 Set at almost the end of a country lane, Trullo Sereno is a beautiful trullo with its own very private pool, al fresco dining, outdoor kitchen and free wifi. The town of Martina Franca is a short drive away and has everything you will need for your stay. It is perfect for a family holiday or a romantic hide away. Sleeps 7 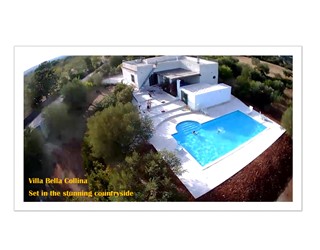 Villa with large pool and panoramic views of the surrounding countryside

Villa Bella Collina sits on top of a hill with panoramic views over the olive groves, vines and the famous trulli. The villa provides a wonderful setting to just sit back and relax in the countryside. The 12m x 6m swimming pool is surrounded with sun loungers, seating and al fresco dining. Three interesting towns; Martina Franca, Cisternino and Martina Franca lie within a 10 minute drive. Furnished as a real home from home it sleeps up to 6 plus 1 people.