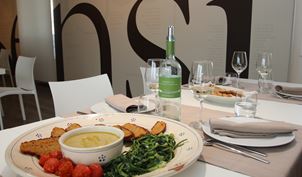 A guided tour of Cantele's wine cellar where with explanations on the wines and grape-growing techniques followed by lunch (menu depending on season and tailored to meet individual dietary requirements) with wine tastings held in the ISensi laboratory or on the terrace overlooking the vineyards.

Classes are held in the sun-bathed kitchen, which looks out on to the vineyards that surround this last outpost of southern Italy. It's the ideal venue for team-building sessions. Educational programs can be customized for nearly any size group, no matter how large or small. The classes are much more than simple cooking demonstrations.

The founder of the Cantele winery, Giovanni Battista Cantele - grandfather to the current generation - was born in 1907 and after the war made a career for himself in the wine trade. Like many in his generation, he found steady work as a broker of bulk wine that he would purchase in Puglia and then sell in Northern Italy as it was not uncommon to ship wine from Puglia (where grape growers had no problems in obtaining fruit with sufficient sugar levels) to blend into the wines of the north. Expanding prosperity and a population explosion in the north had led to growing demand for quality wine.

In the years leading up to Italy's post-war recovery the Cantele family relocated to the Salento region in the south, where agriculture was still the leading industry. However their son Augusto, 16 years old at the time, was reluctant to follow the family to the "deep south" remained in the north and went to school to study enology in Conegliano at the historic Institute for Viticultural Research and Experimentation.

At the end of the 1960s, Augusto finally decided to reunite with his family in Lecce and he began working as a consulting enologist in the townships of Guagnano and Salice Salentino. In 1979, father Gianni and sons Augusto and Domenico decided to start a new winery under the family name. In the early years, Cantele was a bottler, purchasing wines from the wineries where Augusto worked as a consultant. Then, in the 1990s, Cantele began to acquire vineyards and started making its own wines.

The 1990s were important years for Italian wine, with impressive growth in foreign markets, particularly in the U.S. and Central and Northern Europe. In 2003, to meet the growing demand for its wines in Italy and abroad, Cantele opened a new state-of-the-art winery between the villages of Fra Guagnano and Salice Salentino (the best growing zone in Puglia).

Grandfather Gianni was a red wine lover. Grandmother Teresa preferred white. When Gianni lovingly scolded her, noting that there were plenty of red grapes in the world that she could enjoy, she responded by saying that if he wouldn't make her any red wine, she would ask their son Augusto to make her some.

Now in its thirteenth vintage, Teresa Manara Chardonnay is named in her honor.

Today, the Cantele family owns 50 hectares planted to vine and the family's current winemaker Gianni Cantele and agronomist Cataldo Ferrari manage another 150 hectares owned by other growers. The winery produces 2 million bottles annually that feature indigenous Pugliese varietals like Primitivo and Negroamaro, as well as, international varietals such as Chardonnay, Merlot and Syrah.

The Cantele winery has also played a special role in the synthetic cork movement  and were among the first to use the "organic cork," officially known as the Select Bio closureI

Among its accolades, Cantele is one of the few ­wineries in Italy to receive the covented Tre Bicchieri designation from Gambero Rosso for a wine in the premium price category.