Lecce - the 'Florence of the South'

Piazza Sant'Oronzo is the civic heart of the town with a large square where the ancient and the modern buildings sit uncomfortably together. Among the varied structures here is the town's excavated Roman amphitheatre. The statue of a bishop perched on a column represents Sant'Oronzo, a patron saint of Lecce and was a gift from the people of Brindisi, who believed that their neighbour's patron Saint had interceded on their behalf and save their town from the plague. The column is one of two which originally marked the end of the Roman Appian Way in Brindisi (the other is still in Brindisi).

Piazza del Duomo is an unusual interpretation of that familiar Italian cathedral square. In Lecce the cathedral sits in one corner of a theatrical enclosed square; a still space in the heart of town. Alongside is the high campanile.

Roman Amphitheatre and museum in the centre of Lecce (Museo Teatro Romano, open Mon-Sat mornings). Under the gaze of Saint Oronzo's statue is Lecce's Roman amphitheatre, built at the end of the 2nd Century BC. A series of earthquakes, bombardments and unfortunate town-planning initiatives meant that it remained buried and forgotten until after the 2nd World War, when excavations began. About two thirds of the arena was uncovered and archaeologists have calculated that it would have measure some 100x80m with a capacity of around 25,000 spectators.

The town's principal archaeological museum, the Museo Provinciale, has some interesting exhibits from Puglia's long history, including Greek and pre-Greek ceramics. Entrance is free; the museum is located on Viale Gallipoli, not far from the railway station. It's closed for an hour at lunchtime, and on Sunday afternoons.

Il Castello di Carlo V  inherited vast swathes of Europe, including the south-east of Italy. Plagued by attacks from the Ottomans, he ordered a series of towers and fortifications to be built along the coast of Puglia. One such work is the castle in Lecce, built between 1539 and 1549 on the site of a Norman fortress. Its ramparts belie the beauty of the interiors, which feature a delightful central courtyard and a series of halls decorated to suit the tastes of a Holy Roman Emperor. Today the castle plays host to cultrual and artistic events.

Via Vittorio Emanuale is the main street lined with shops and cafes that runs between Piazza del Duomo and Piazza Sant'Oronzo. Along the street you'll find the tourist information office and Church of San Giovanni Battista.

A good way to enjoy an initial introduction to Lecce's centro storico is to take the little tourist 'train' (trenino) which offers a guided tour of the centre.

Porto Cesareo, Gallipoli and Torre San Giovanni are some of the province's pearls of the Ionian coast, with Santa Maria di Leuca to mark the boundary between Apulia's two seas. io.

Puglia's reputation for cheap Primitivo and Negroamaro wines is gradually being replaced with one of high quality wines made from locally harvested grapes.

Experience some of these wines in the privacy of your Puglia Holiday Rental home. Our friendly wine tasting expert will bring a selection of good quality Puglian wines and share his knowledge of the history of the wines, explain what to look for in the taste and bouquet, and unravel some of the jargon often used when describing wines.

The wine tasting event is both informative and entertaining so whether your a first timer or a seasoned wine taster you will have an enjoyable and memorable evening.

The wines will also be accompanied by a selection of local cheeses, cold meats, etc. 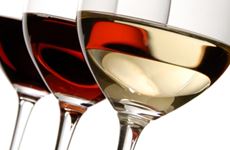